I honestly have not been afforded the time or clear skies to be choosy about when and how I shoot the night sky most of this year.  I had intended to share Neptune with the +Virtual Star Party again this past Sunday, but it was not to be so, the clouds called me inside again.  I did get a break the night after, Monday, August 26, 2013.  Shortly after 1am or Aug 27, 0400UTC, I took this shot in very poor conditions. 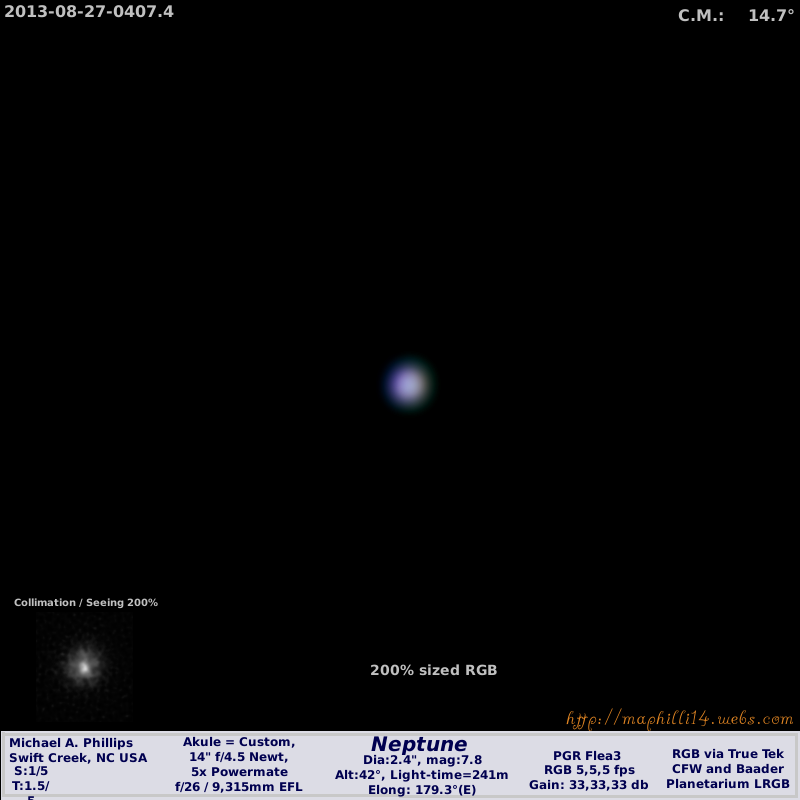 If you pay attention to the star, labeled Collimation / Seeing in the lower corner you might notice that there is NO airy disk around the star.  A 2x series of collimations via catseyes and a round defocused star was best I can do.  This lack of airy disk is most likely the result of having quite poor seeing.  The star was jumping all over.  It was a dimmer star and the exposures were consistent or just faster than the planet Neptune itself.  It does reveal a sharp contrast between the resolved 2.4" disk of Neptune and the point of light from the star.

I was unable to get Triton due to the increasing cloudy and soupy skies.  And now back to our regularly scheduled M-Cloudy and 50% chance of rain!

Here is the growing list of all Neptune's I've ever shot.

And shout out to +Universe Today and +David Dickinson  for some Neptune info on opposition and finder charts!
http://www.universetoday.com/104098/how-to-see-planet-neptune-our-guide-to-its-2013-opposition/

Posted by Michael A. Phillips' Astro and related blog at 12:37 PM No comments:

If you didn't know it has been a terrible season for astronomy in the mid Atlantic USA.  I purchased a new CCD, but that had nothing to do with the bad weather!  Despite the weather, I managed to catch Pluto 3x times.  Overlayed on this animation you can see the movement from July 22 to July 26.  The middle and last frames is from the 25th and 26th respectively and only 24 hours of movement.  I cannot say for certain but I think if you imaged Pluto over an hour or two you could see movement against the background stars.  I hope you enjoy this animation and I only wished the weather allowed me to share with the +Virtual Star Party

Posted by Michael A. Phillips' Astro and related blog at 6:51 AM No comments:

Back at the clearing of the summer back log - day 7

Yet another object I've already shot.  Here is M102, a small, edge on galaxy.  This time I decided a side by side comparison as it was taken with the same scope and different cameras.  The canon 7D is on the left and the SBIG STF-8300M on the right.  They were taken in different conditions and different nights.  Things that jump out at me are the image scale on the Canon is larger as it's 0.55''/pixel whereas the SBIG is 0.7''/pixel. Also, the Canon 7D is shot in bayered color mode and the SBIG being monochrome is only shot in clear / luminance channel. The other thing to note is that the integration time is quite shorter on the SBIG. You be the judge.

Here's the recent work on M102 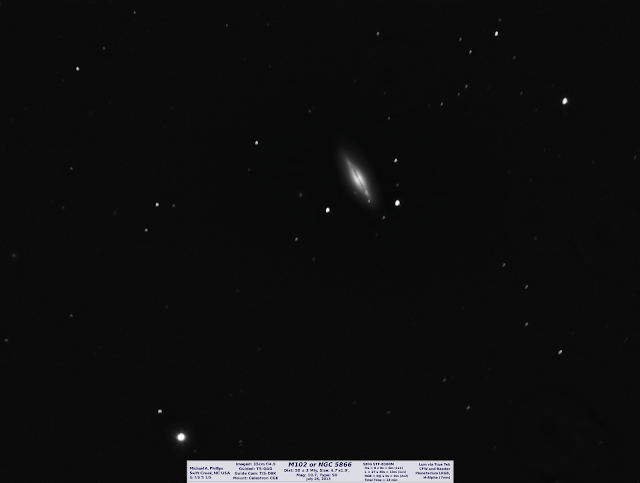 And the old shot 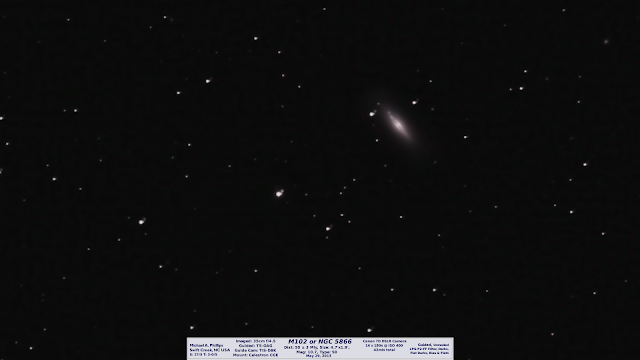 And the side by side 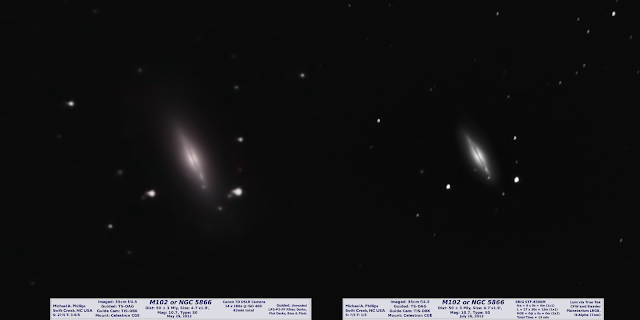 Not meant to be a real or honest comparison, just my happenstance results.
Posted by Michael A. Phillips' Astro and related blog at 9:02 PM No comments: