I will be spending some time with this as I've not gotten good images in quite some time.  This may just be one of the best shots I've ever taken. 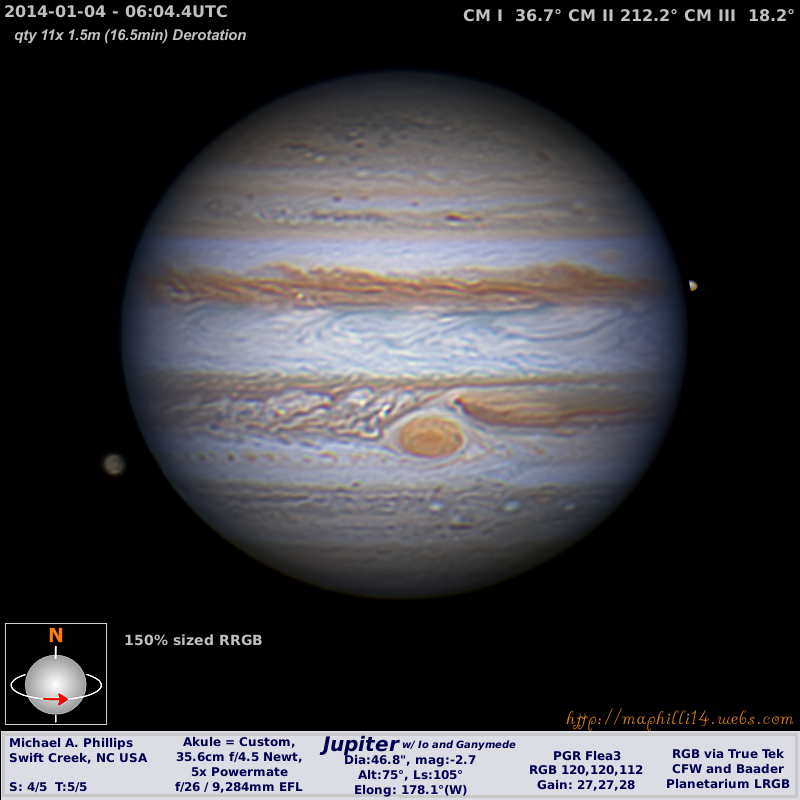 My fatal flaw in the past half dozen times out may have been lack of over-cooling and setting up too near to the warm house in the cold winter.  I also had been setting up near my family van, which while cool and not having run for several hours, may have been retaining heat differently than the ground.
So I moved as far away from the house and neighbors house as possible and I think that helped some.  I also started cooling the spit out of the mirror, aggressively.  Even when cooled for hours in the winter the heat in the pyrex mirror comes back.  I think there's a small heat engine inside that beast!  I think managing the local thermal conditions at night is a bit of a razors edge and the slightest little change means quite a bit!

I don't often get clear skies for a transit of Ganymede and wanted to make the best of it.  So I shortened my capture duration and ran 30 of them back to back with the camera settings embedded in the image Red for 30s, Green for 30s, Blue for 30s, pause a second and repeat.  I'm amazed at how much Io moves in 90seconds.  The planet's features don't change much in 90s for my resolution, but the inner moon, Io moves FAST!


I have a work in progress animation that will probably get uploaded to YouTube and become an adjunct post to this later on.
Posted by Michael A. Phillips' Astro and related blog at 8:21 AM