My 9th annual best photos of planets and solar system bodies for the year of 2016!

2016 gave me 37 nights of imaging for the year.   Being a Mars year I would have expected an uptick from 2015 which gave me 33 nights.  So I guess 4 extra night is somewhat an improvement in conditions.  I did also get a whole week's worth of weather during Mars season.

The other huge highlight was the Mercury Transit.  Seen in crossing the sun in the upper right I made a nice slideshow on youtube.

In keeping with tradition of the past 9 years here is my short list of best of's!

Clicking this link will bring you to the desktop wallpaper sized version. 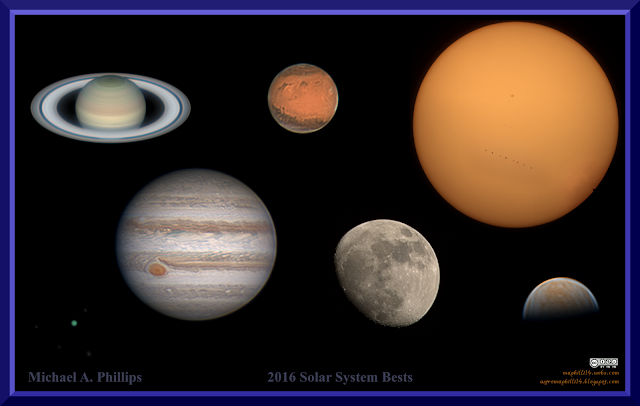 Here is the labeled version.  Clicking this will bring you to the desktop wallpaper sized version. 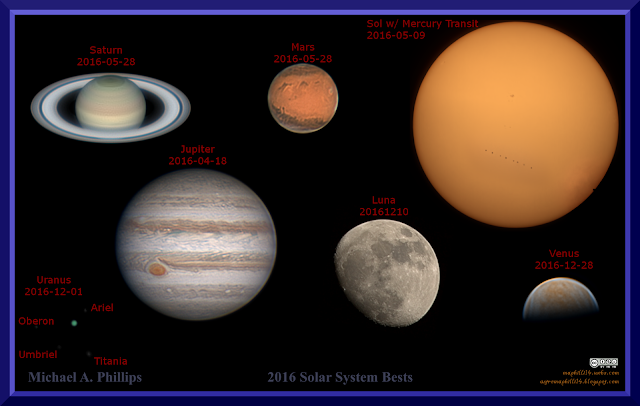 I hope you enjoy my photos as much as I do.  Here's to a wonderful 2017.  Keep smiling and keep looking up!

Posted by Michael A. Phillips' Astro and related blog at 7:28 AM No comments:

I love astronomy that's no secret and one of the reasons why is that there is constantly something new to discover or a first to be had.  On December 28th, 2016 I had two firsts.  I was out to shoot Venus one last time for my yearly mash up (2016 pending!) and was in for a surprise or two.  First surprise is seeing a daytime Venus with the unaided eye.  I had a hard time getting my scope, +Akule  centered on my target.  So I whipped out my binoculars only to find it quite easily.  Realizing it was just above the trees I got excited as it should be easy to find.  Sure enough there it was, no telescope no binoculars but it was MID AFTERNOON in broad daylight!  I was astounded how clear the atmosphere was, 5/5 for transparency!  Second first for came after getting the the telescope and camera setup I was able to get a nice animation of the cloud tops.  I found the seeing above average and I had a long period of time to shoot before Venus slipped into the trees.  I shot from 20:49:24 UTC to 21:44:31 and was able to use the best seeing conditions to make this animation from time 4:19 to 4:38 EST or 19 minutes.  This animation of UltraViolet light shows how fast the cloud tops of Venus move in NINETEEN minutes!

So how fast do the clouds move? According to my good friends at Universe today, the winds "At the very top of the cloud layers on Venus, wind speeds reach 355 km/hour (or 100 meters/second). This is the same the jet stream here on Earth."

But Mike are you sure it's not rotating? Yes, Very!! Why? Because the rotation period, aka a day on Venus is 116d 18h 0m. So you are certainly seeing the cloud tops blowing across the top of the atmosphere.

I also shot Venus in Infra Red and when you use Infra Red as Red, and UltraViolet as Blue, you can make a 50/50% mixture of those to make a fake green. Then using IR as R, UV as B and a synthetic Green you can make a false color or IR-sG-UV image of Venus. It looks like this...
After 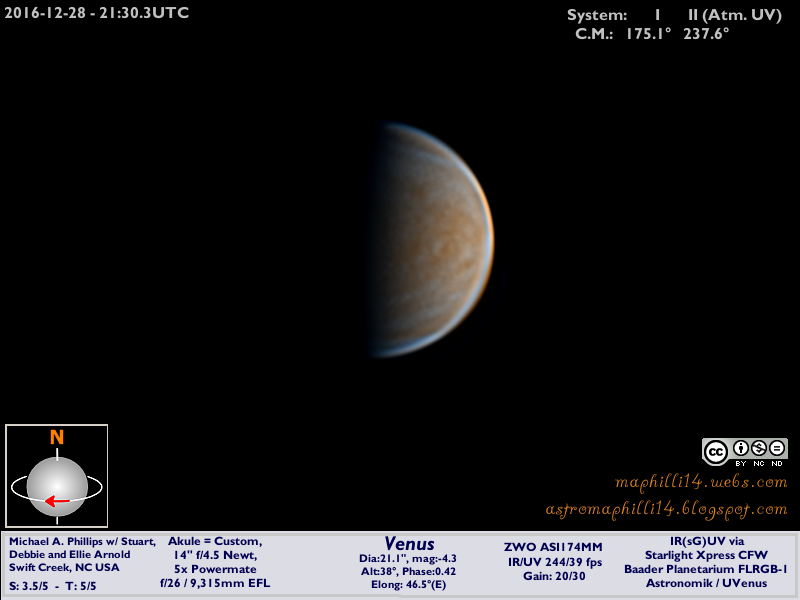 The UV is actually a derotated version of 8 x 90s or 12minutes of 'sub' time.  Here's the UV and IR alone.  Since it was daytime and the background levels were not dark, I left it bright enough to show the daytime UV levels. 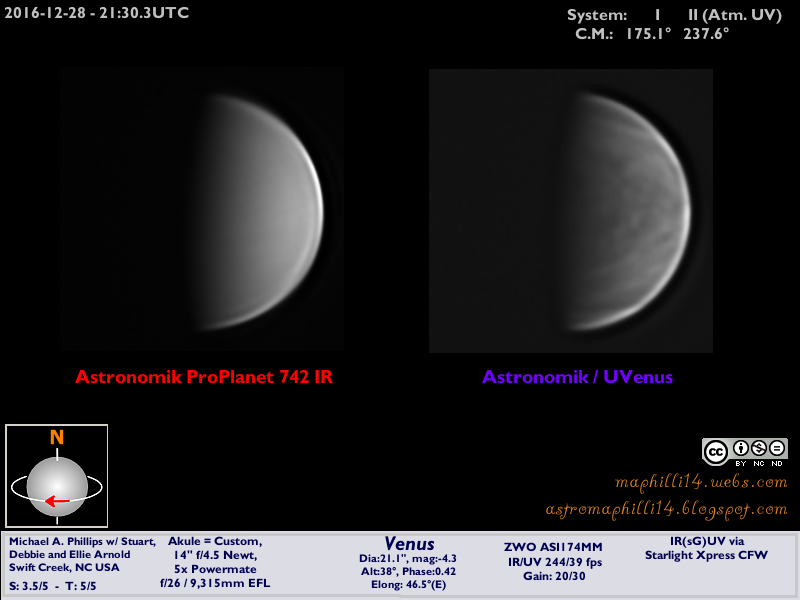 Thank so much to my friends and family for sharing these firsts with me it was quite a fine way to end my 2016 observing season.  Stay tuned for the 2016 best of's!!

Mike
Posted by Michael A. Phillips' Astro and related blog at 2:25 PM No comments:

A solid week of Mars

Since Mars only makes a good appearance every other year, I tend to get a bit crazy when it comes around.  This season was pretty cloudy and rainy but from June 7th to the 13th I had a personal record 7 days outside with the scope.  I'll try to give you a quick review of the weather for each image as well as my favorite aspects of each.


On the 6/7th TS Colin FLEW across NC leaving in the morning.  That evening had poor transparency with some high winds aloft and many small passing clouds.  This only netted me a single good image...  My favorite thing about day 1's image is seeing Valles Marineris: The Grand Canyon of Mars (http://www.nasa.gov/multimedia/imagegallery/image_feature_83.html) 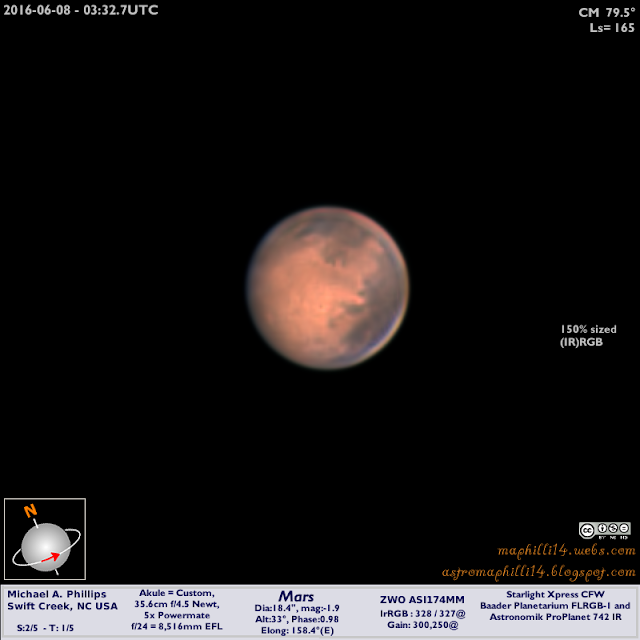 By the 2nd night out, the 8th, the seeing was best for the week, 4/5 and nearly perfect 5/5 transparency.  There was some rapid cooling but also VERY dry.  My favorite thing about this image is the peak of Olympus Mons poking out of the morning haze! 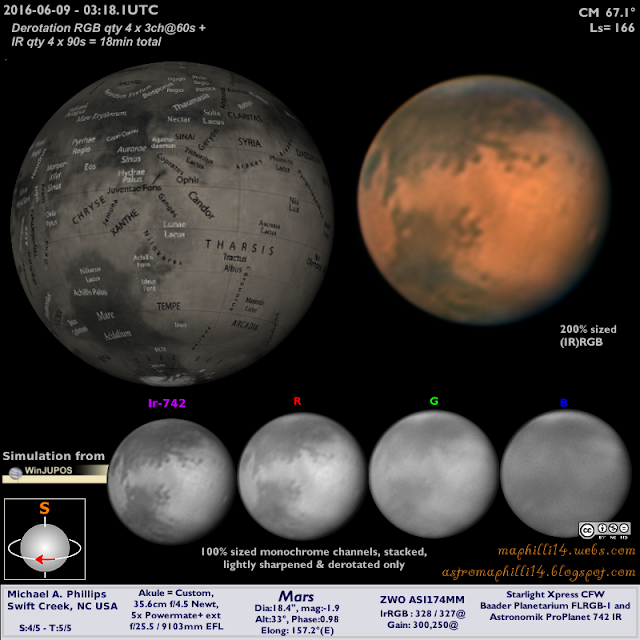 The 3rd day, June 9th, was fairly average 3/5 and hazy clouds early.  My favorite thing about this nights image are the frilly spikes around the Xanthe region in the middle.  It's always so varied and fun to stare at! 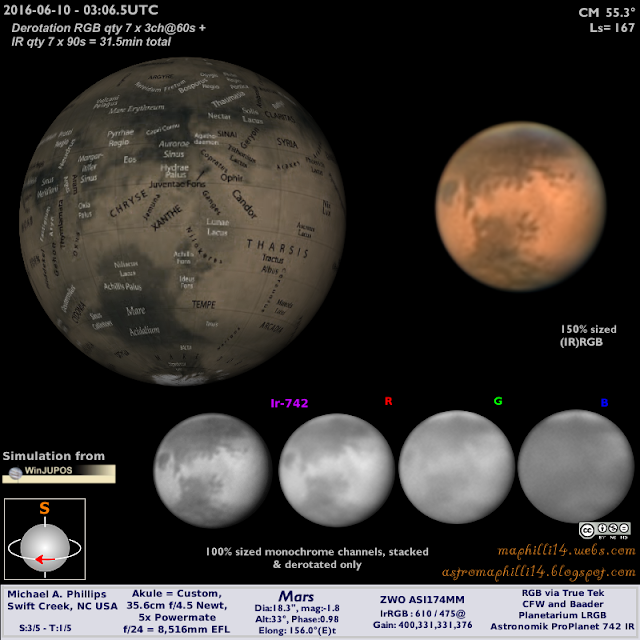 On the 10th, or 4th night out, I shot in some above average conditions.  I think I was lucky as I lured my fellow Triangle observer, +Tim Jensen out and he had some bad clouds whereas I didn't, go figure.  My favorite thing about this night's image was getting Sinus Meridiani (https://en.wikipedia.org/wiki/Sinus_Meridiani) 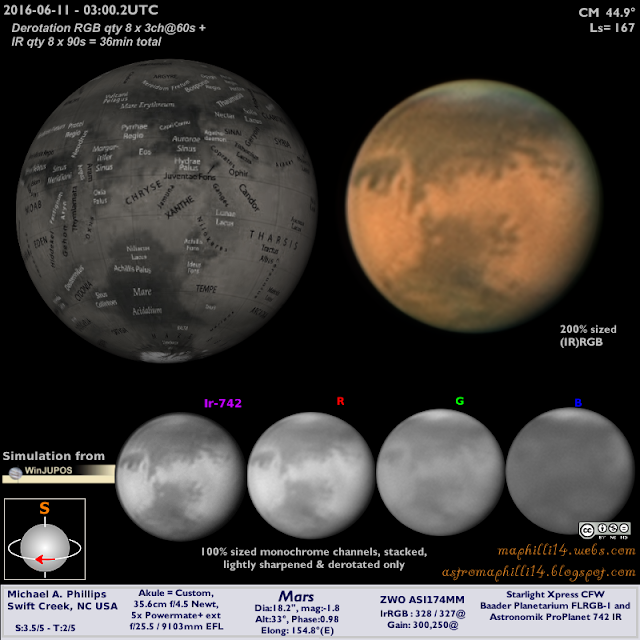 On the 11th, or 5th night out, I started to get a bit weary and the conditions didn't get much better with the seeing mostly average and just average transparency.  Much warmer than previous nights, but still a 'sleep with the windows open' night!  My favorite thing about this image is the strong contrast around Sinus Meridiani and the small morning clouds around the Tharsis region. 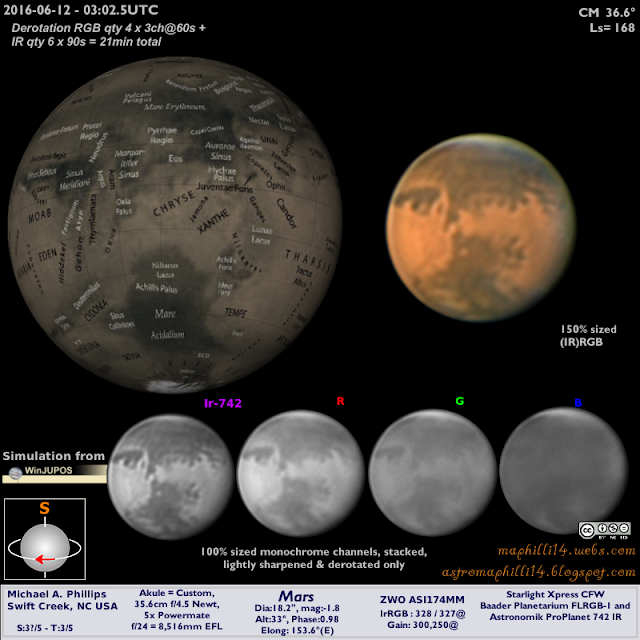 Night 6 was June 12th and saw much warmer, windier conditions and below average conditions.  I was still able to eek out a decent image using the higher frame rates of my AS174MM camera!  While not much to look at compared to the previous ones, my favorite thing about this image is the stark plains of Arabia in the lower left area. 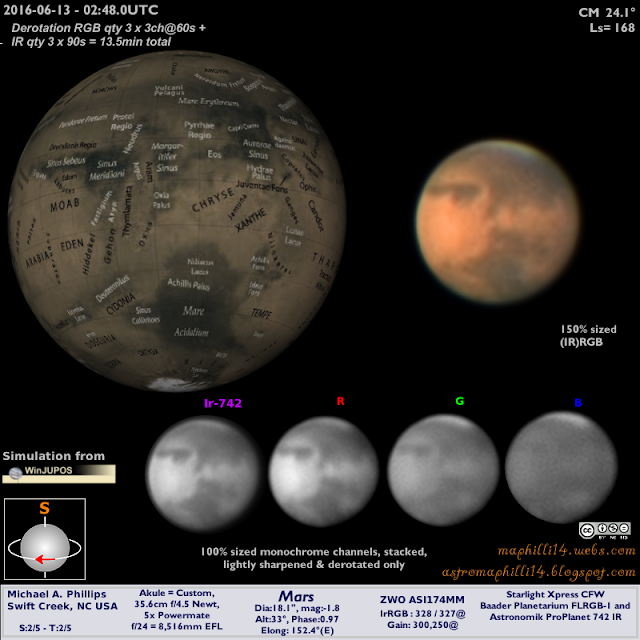 The 7th day, June 13th jumped up in seeing quite a bit, perhaps due to an oncoming front, I don't know why.  Seeing was about 3.5/5 and the clouds were murky with rapid cooling but clear and nearly steady at moments!  I only was able to get a single image with no derotation, but my favorite two things in this image are the dark Syrtis Major on the upper right limb, just about to set into the evening darkness and the clouds over Mare Acidalium (https://en.wikipedia.org/wiki/Mare_Acidalium_quadrangle) 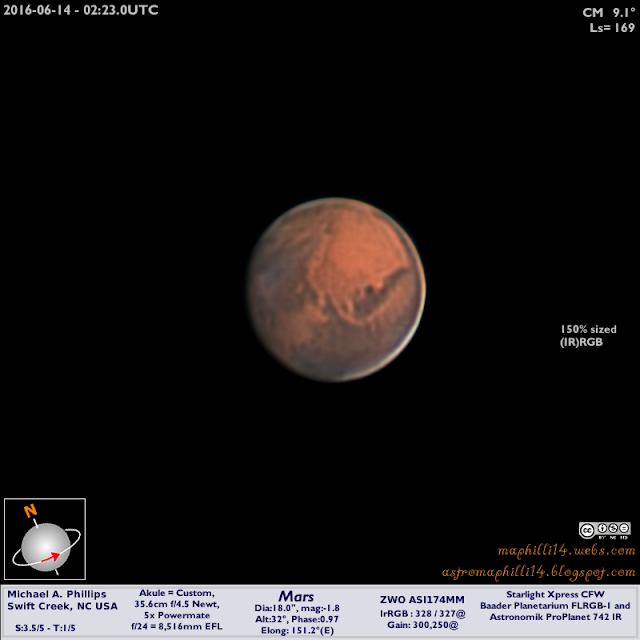 Thank you for taking the time to read all my details and I hope you enjoyed my week long tour as much as I did!

If you would like to see the whole season please look here https://photos.google.com/share/AF1QipM55Mxqht_VVR_DqgVnpRO2nYKBwjRvosDBrLd-UwrrMrmYRJF87hYtyyV8WBBc1g?key=ZTkxY3o2TUFuS2dxOWpKZXZ3ZWhPdEJsRVAwTDVn

For details on my telescope please ask +Akule

For capture details please look here and I will be releasing major updates soon, so please come back!
http://maphilli14.webs.com/software-and-techniques

If you really can't get enough I made the previous season's photos into a mug:

and a few others into various things like iPhone covers and pillows over at redbubble:

http://www.redbubble.com/people/maphilli14/works/13774504-a-season-on-mars
Posted by Michael A. Phillips' Astro and related blog at 4:52 PM No comments:

Last week I was able to get a rare FOUR nights out with my telescope named +Akule.  In the prime part of the night Mars and Saturn are rising in Scorpio.  Both are quite low for me at 35° North Latitude and I have to work around the trees of my house. 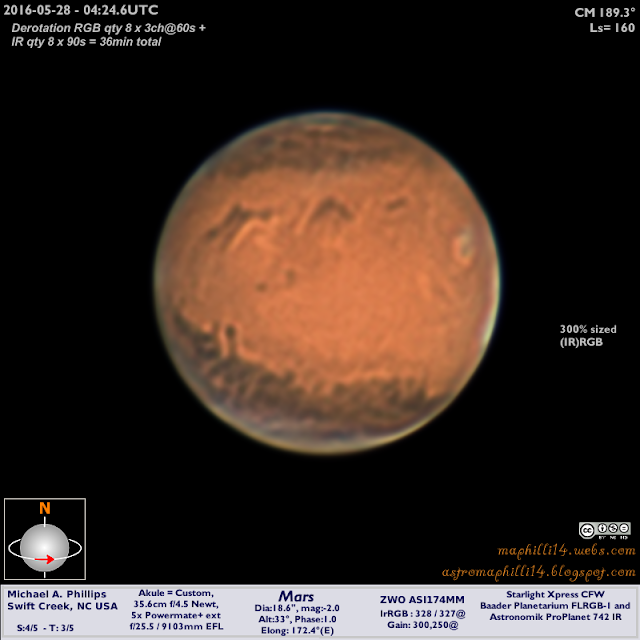 with details and more moderately sized... 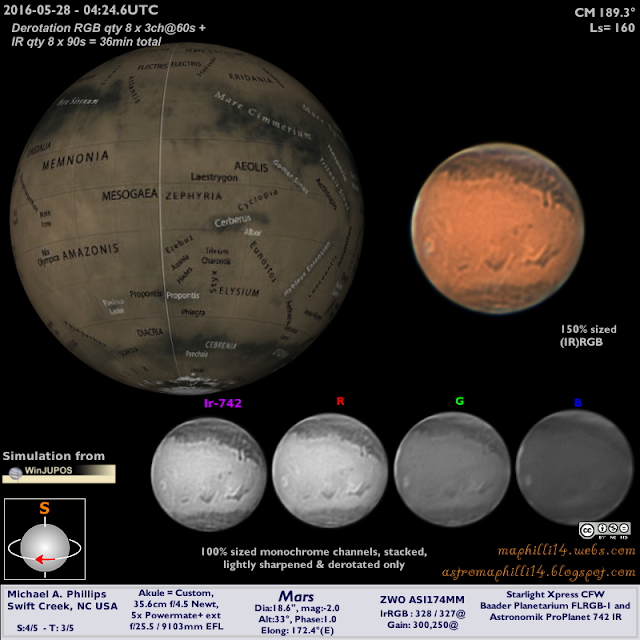 The week started with clear skies but quite poor seeing. I didn't care much as it had been so long since the last imaging session. I recorded at a really high frame rate and was able to eek out a decent image. 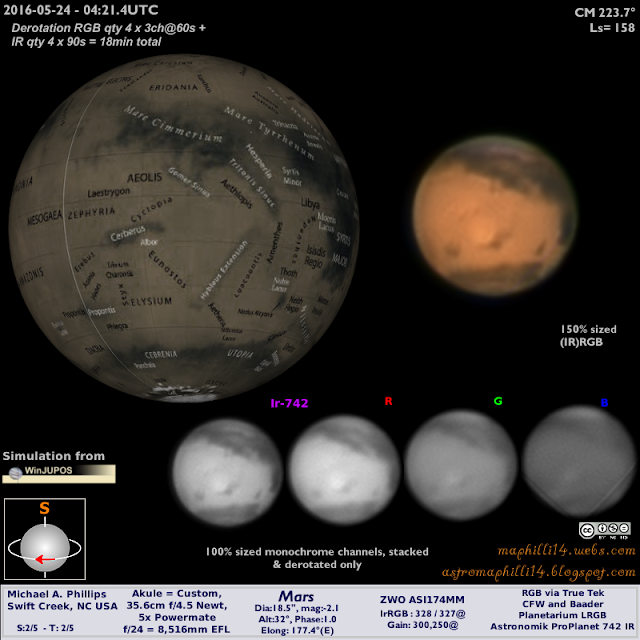 I did it again Tuesday... 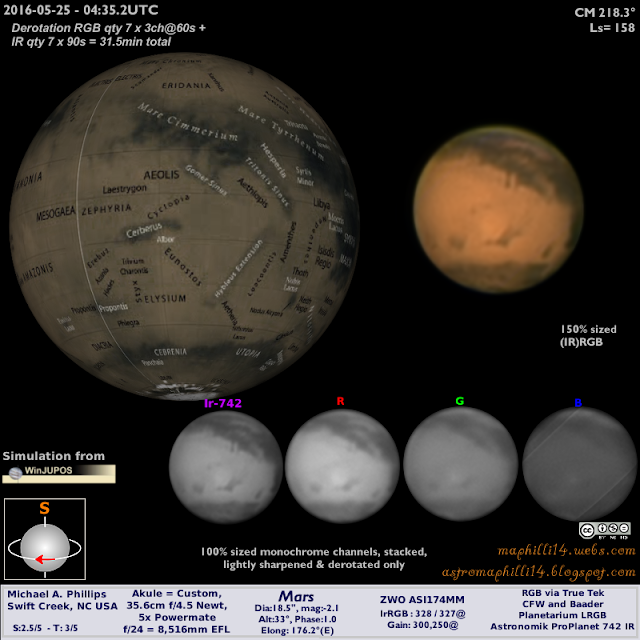 ... and another shot that got even better on Wednesday... 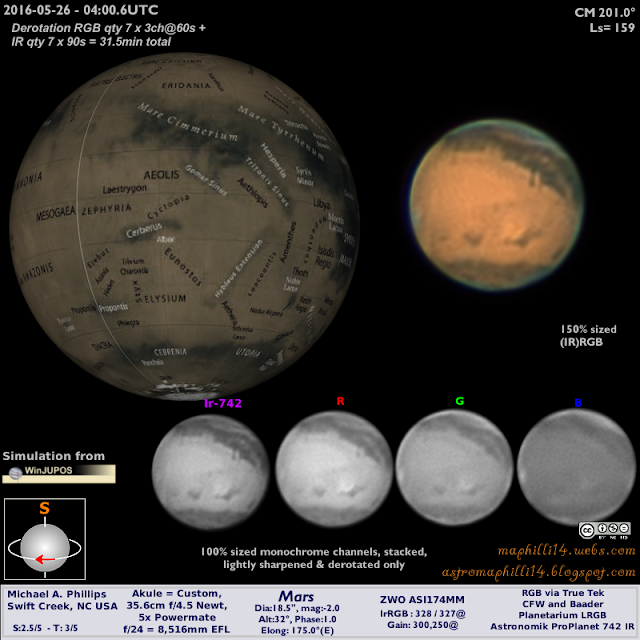 Chasing after Mars in the sky is Saturn. Since the seeing was so good on Wednesday I tried for Saturn but wasn't happy with the results.  Thursday had a small chance of rain and too many clouds to try, but on Friday the skies rocked.  Buffered by TD Bonnie, which is soaking us badly right now, the skies were a rare 4/5 for seeing!  Shortly after taking the Mars photos at the top, I swung over to Saturn and got this beauty. 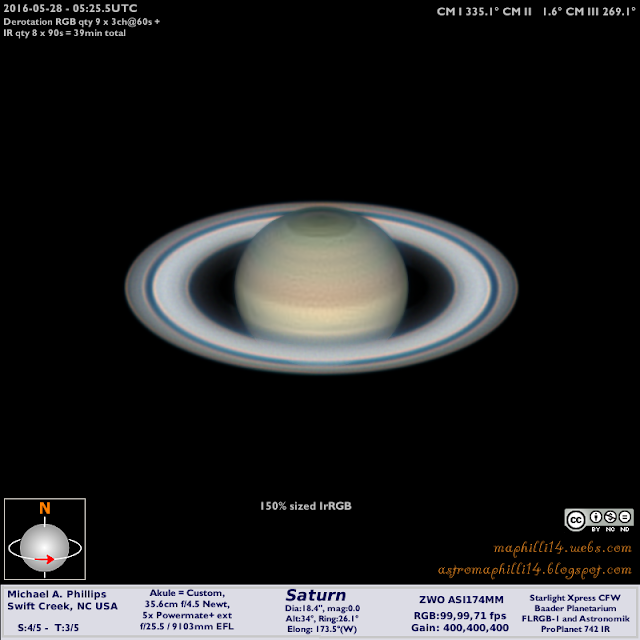 For more photos of this and past seasons, deep sky photos and some how to's of how I made these images, please visit my homepage at http://maphilli14.webs.com/


Posted by Michael A. Phillips' Astro and related blog at 6:16 PM No comments:

I tried something new that I have not done before and that was to piggy back my 200mm lens with the Canon 60Da camera onto the 14".  I had planned on guiding but the coldness of mid 20*F kept me from that extra bit of setup.  I found that the 200mm at f/4 and 1600ISO on the 60Da did pretty well up to 2min unguided and even roughly aligned. Here's the monster full res version of 5200x3400, from the camera's resolution!  http://i.imgur.com/OUeiMQU.jpg


Next time I will try guiding but I think there might be a portion of my finder in the lower areas of the frame that is reflecting some light into the lens.  I'd like to look at resurrecting my old 6" with 4" guide scope onto a new mount for these types of shots as it is VERY fun and rewarding to use a one-shot color camera on nebula.  Nextime I will work harder to mask the brighter areas of the Orion Nebula too, as it's a bit washed out in some areas.

Posted by Michael A. Phillips' Astro and related blog at 7:18 AM No comments: