First here is the untouched animation showing Uranus at the same exposure of 1sec.

Next I added the color and properly exposed Uranian disk.  I shot at a nominal focal length using the 2.5x powermate and the soon to be older Flea3 camera.  Next time I'd love to get the QHY and 5x Powernate!

Also relevant, my 4 year old sounded out Uranus to...

Also the fact i can image down to 16th magnitude at this focal length has me wondering about splitting Pluto and Charon!

Posted by Michael A. Phillips' Astro and related blog at 5:51 PM No comments:

And then there was ONE

I'm rolling through the Messier Catalog.  It's 8 or so years in the works but I now have images of 109 of the 110 objects!  Only one left is, M79 in Lepus the constellation just south of Orion.  I will hopefully image it before the end of the year.

Total list and progress is on my home page - http://maphilli14.webs.com/mike-s-deep-sky-photos

On a single clear night, mind you there haven't been many, I shot 3 more.

Here's M72, which I thought I had shot previously, but mis labled it so I had to shoot it for real this time! 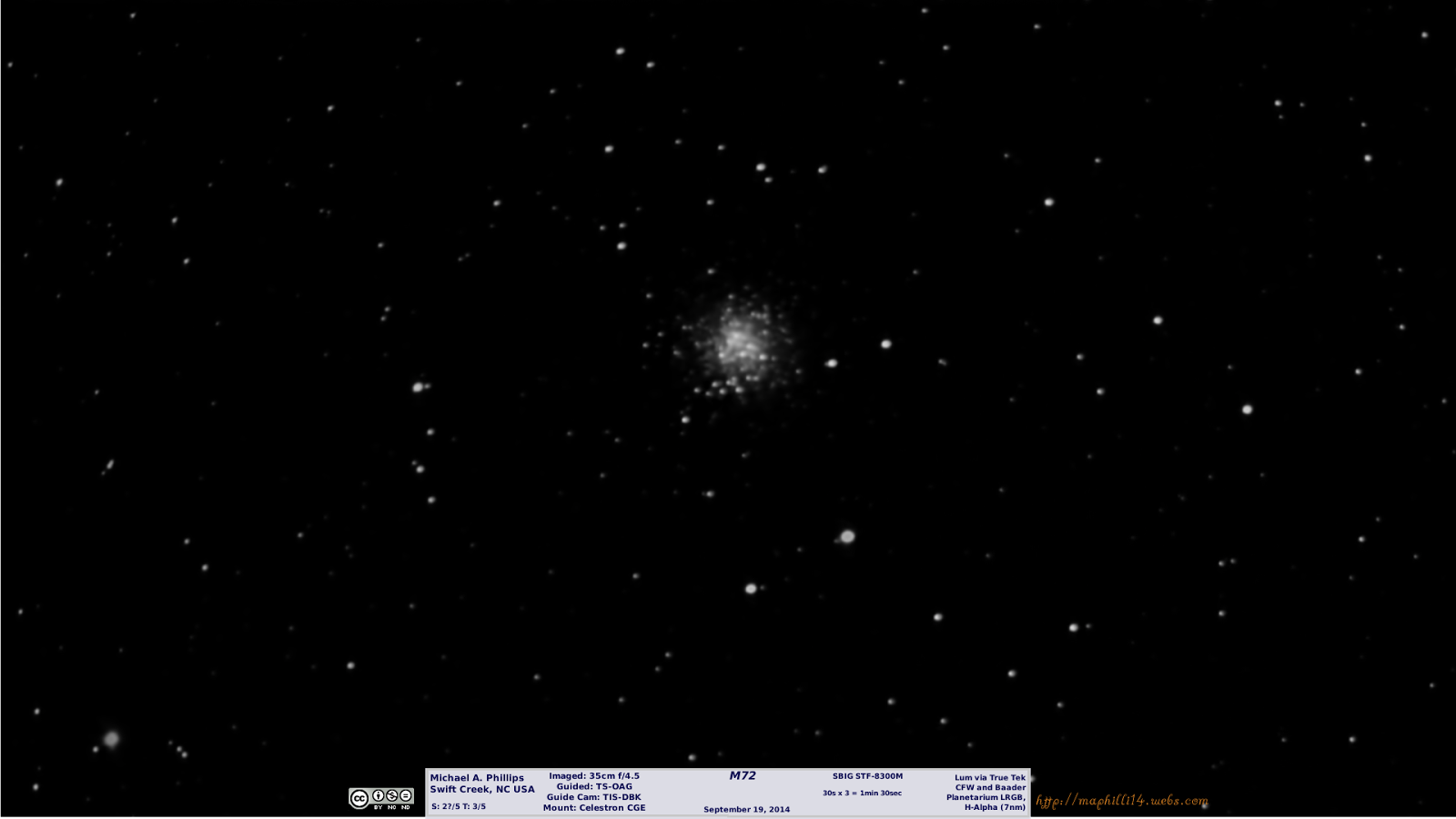 Next up is either an asterism or open cluster, it's listed as both in different places, but M73 is the simple group of 4 stars in the upper right. 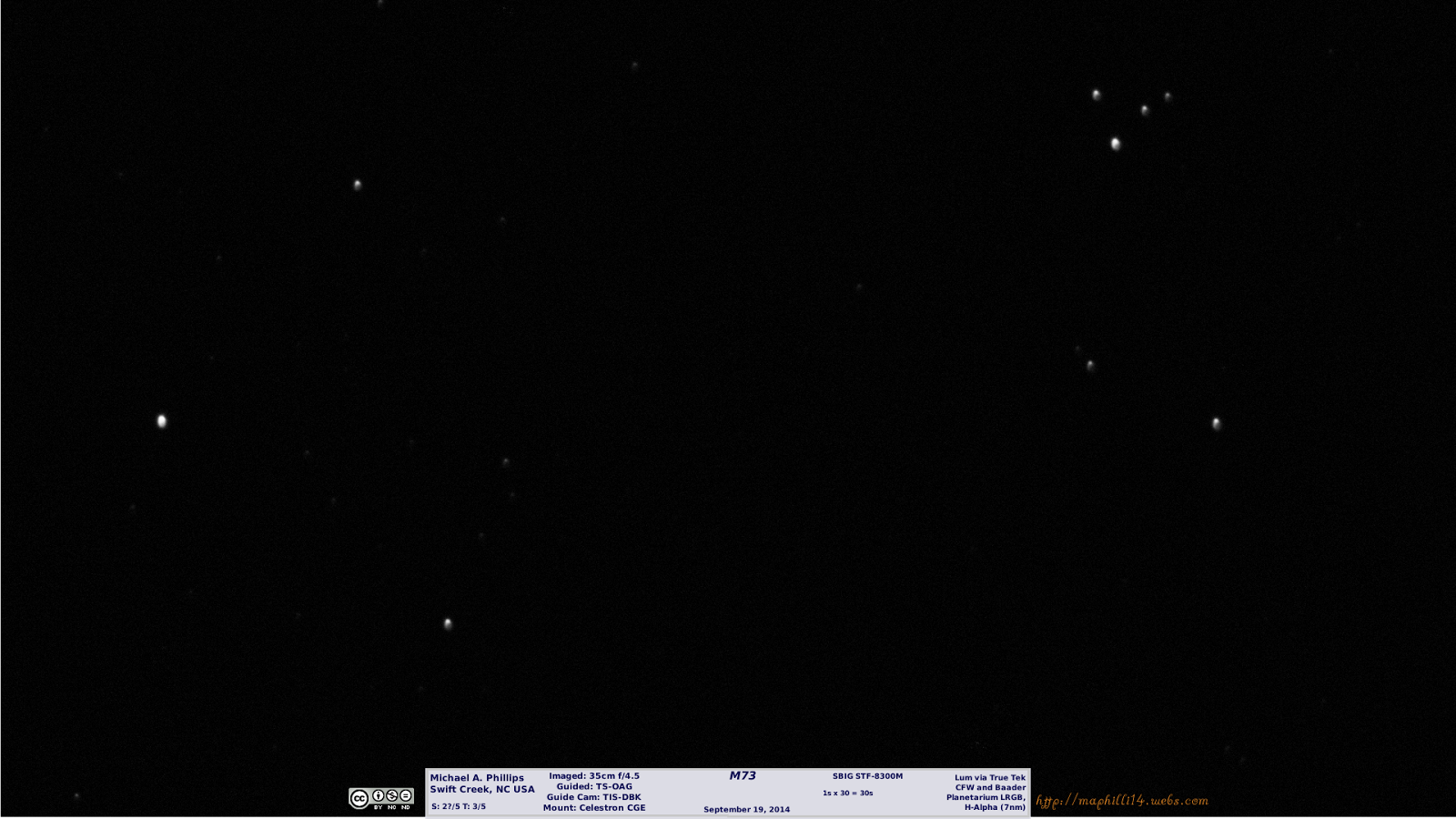 M30 came out very nicely after a few battles with software and alignment issues in the previous two shots.  Here is the full field.  But click here on Astrobin for the full res 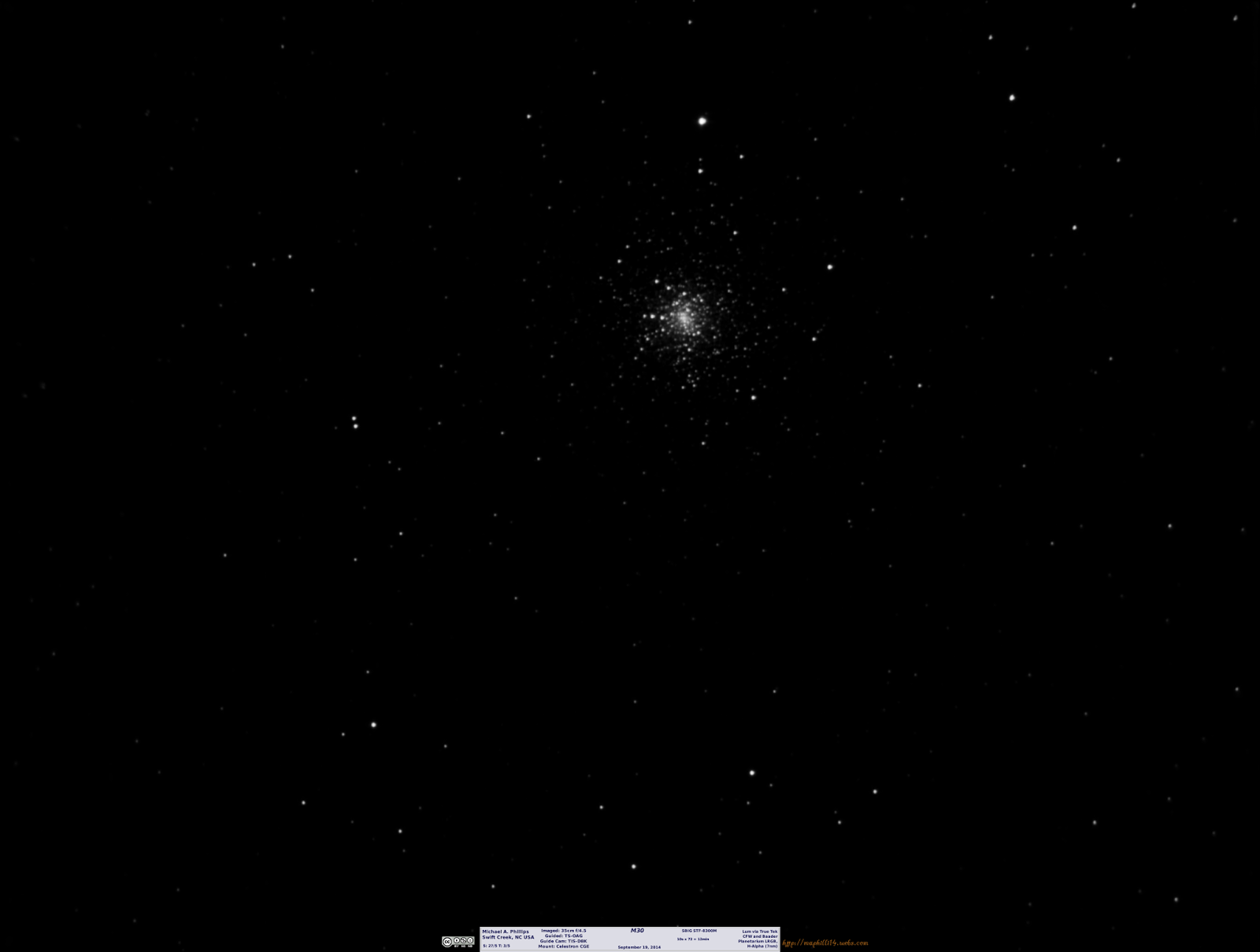 Here is the full res cropped at HD res. 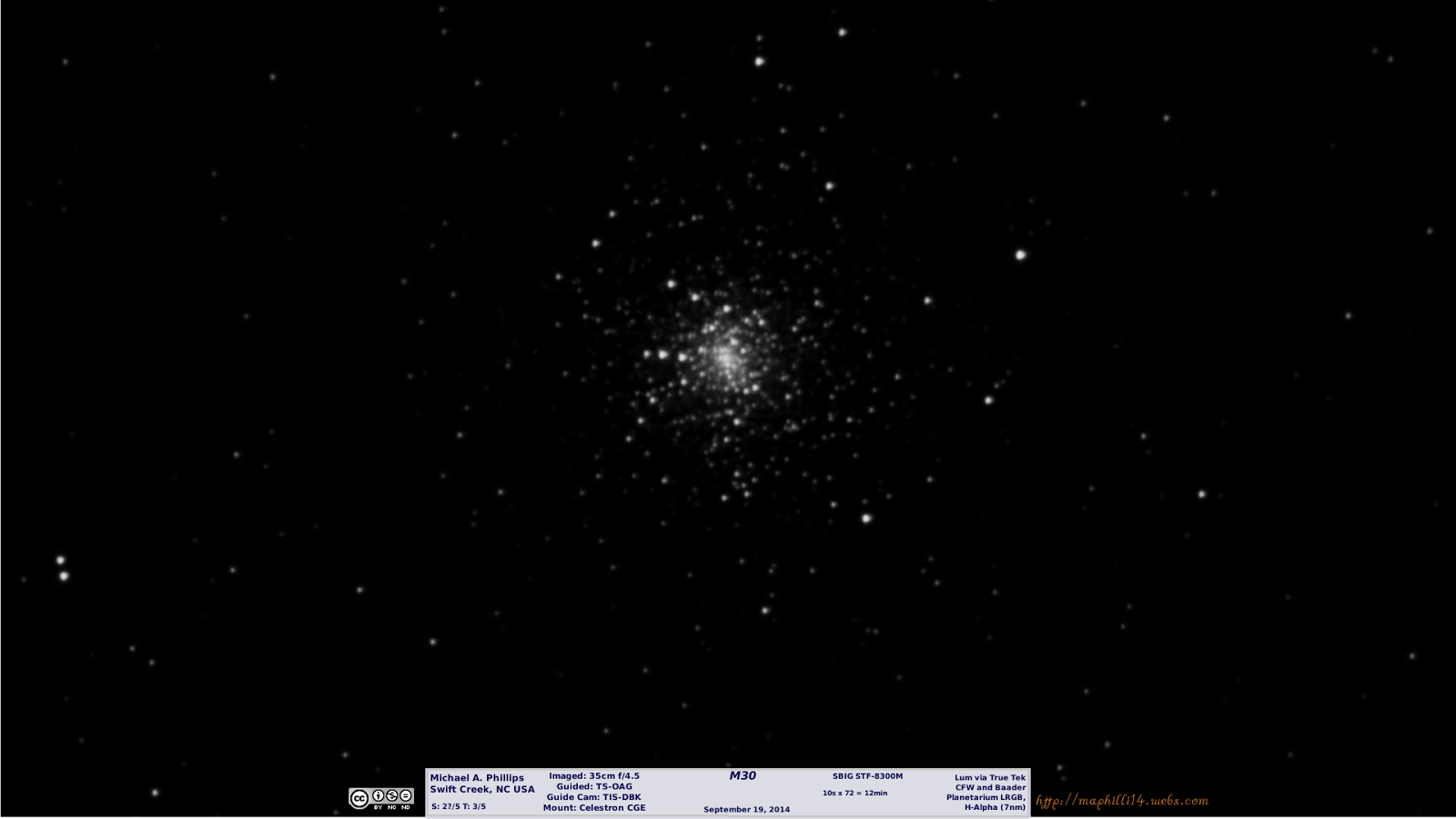 While I waited for my targets to clear the trees I found a small group of galaxies, NGC 6702 & 6703.  Amongst them are many other galaxies, mag 15-16+  I found no measure of distance or radial velocity, which I initially found intriguing but am no annoyed I don't know how far away they are! 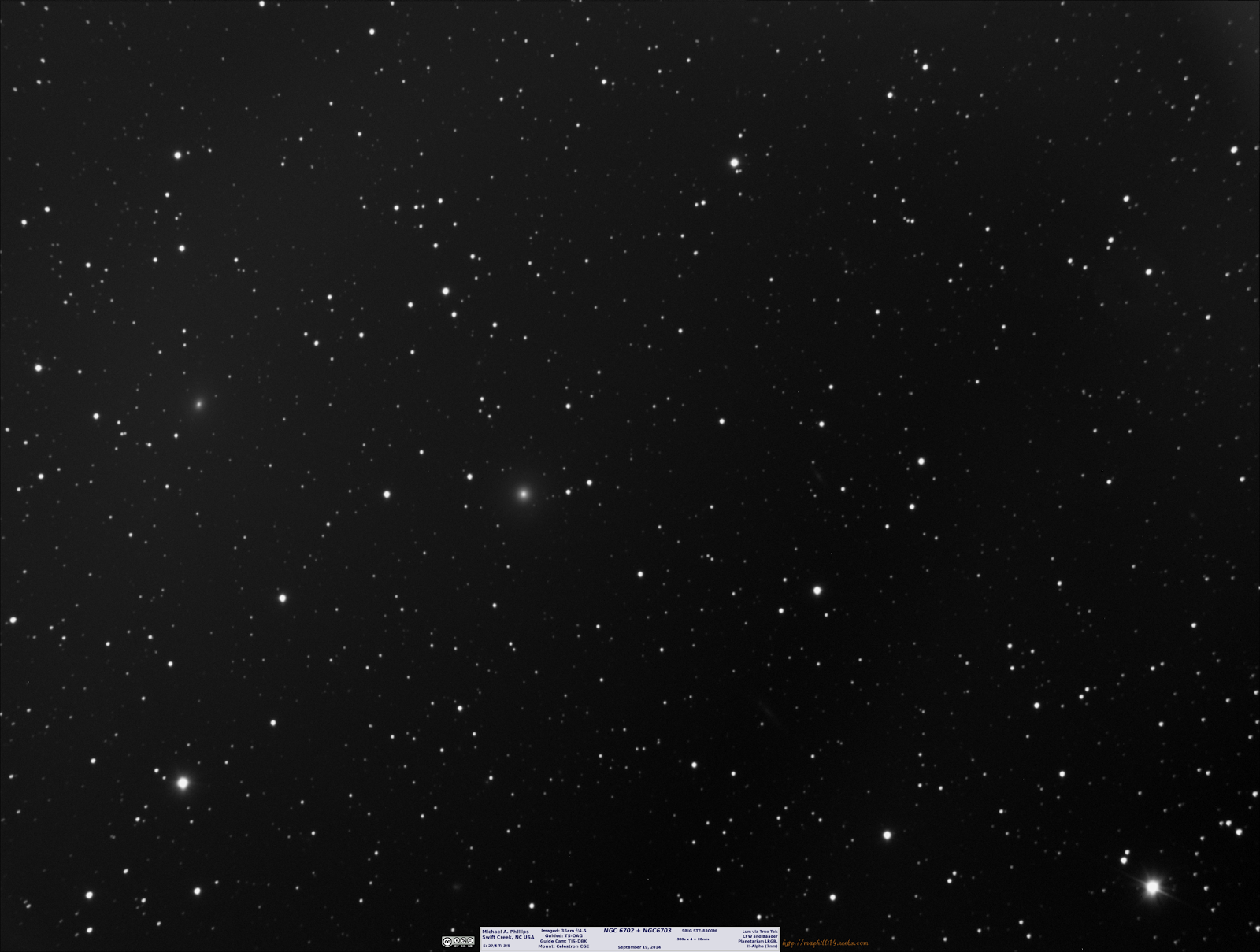 Here's a overlay with labels. 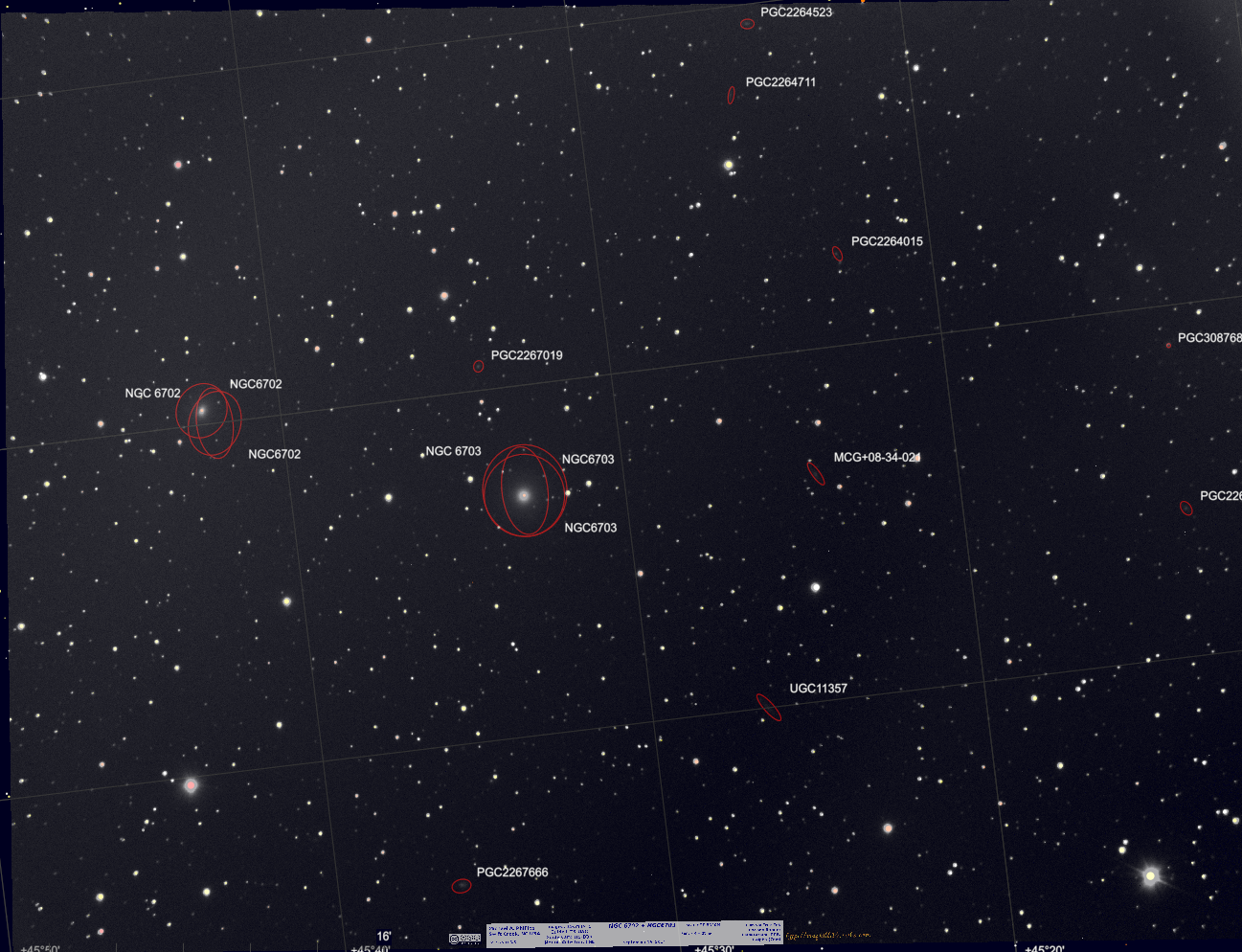 For more trippy 'vastness of the universe reads' link to an old post about Abell 262 here
Posted by Michael A. Phillips' Astro and related blog at 10:26 AM No comments: