I was inspired by Fabio Plocostomos and Chris Go's work on Ceres at high res and decided to go for it myself near opposition or good seeing.  So that single 2 day break in rain and clouds a week ago yielded some good Venus and Saturn images and also this great view of Ceres.

I had a hard time finding some good ephemeris data for angular size so calculated it myself as follows:

δ = d / D, where δ is the angular size, d  is visual diameter and D is the distance to the object.

So using the WRONG units I get:

I hope to not have overexposed the object which would have caused bloat or bloom in the data.  I stretched in post processing and resized to 200%

Posted by Michael A. Phillips' Astro and related blog at 6:14 PM No comments:

Posted by Michael A. Phillips' Astro and related blog at 6:18 PM 1 comment:

I was amazed at how far this comet moved. I started my search near Saturn as it was just there a week ago. I couldn't find it. I looked on skyandtelescope.com and found it halfway over to M44. It appeared easily in the 60mm finder-scope and didn't look like much in the 6" LXD. I guided via the 4" retractor on the comet for 21 x 3min subs. Turned out half were behind the tree branches and should be thrown away. I also forgot to rig a dew-shield and may also have some bad stray light. I found the DMK didn't show up on the T42, but did on the T61 under winxp. Stars were bright and round after focusing on the moon, but did find that there was not enough focus depth so I used the 90* televue diagonal. Guiding on the comet via PHD Guiding was easy and the CGE was very up to the task for over 1 hour! Unfortunately I did no align the guider and found the comet was in the corner of the frame and the tail was out of the frame. Since it was cold and dark I didn't try to align 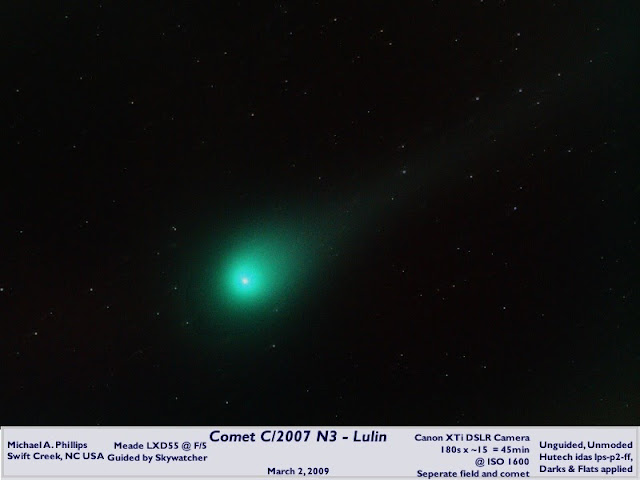 Some things to change next time:

1) guiding and imaging on the same computer
2) alignment of the imaging and guide scopes (finder too, why not?!)
3) dew / light shield on the imaging scope


Posted by Michael A. Phillips' Astro and related blog at 7:21 PM 1 comment: