Every year since 2008 I have assembled my own images in a mashup format.  Inspired by +Mike Salway  (http://www.mikesalway.com.au/) I have tried to pick the best images I took of planets during the calendar year.  A couple of years ago I got into comets and asteroids and have been trying to contribute to the Minor Planet Center's research (http://astromaphilli14.blogspot.com/p/all-michael-phillips-observed-asteroids.html).  My previous best of's are all here:


This year found a drop off in imaging from 71 nights in 2014 to 33 in 2015.  While I have a growing addiction to my favorite video game +Destiny the Game I also know that this year was the rainiest and cloudiest I've seen since moving to North Carolina in 2003.  Last year was probably busier because of the Mars opposition. This year the slack of one less planet would have been taken up with additional Deep Sky work, but those partly cloudy nights just weren't worth the effort.  Perhaps with Mars a partly cloudy night may have been worth a peek through some thin clouds but not faint fuzzies.  For those wondering I keep my astro logs in a great open source program called Observation Manager Multimedia by Michael A. Phillips is licensed under a Creative Commons Attribution-NonCommercial-NoDerivatives 4.0 International License. This year still had no Mercury or Pluto but I did get Eris. Which is seen in the lower right taken on three consecutive nights in early October.  I was amazed at how bright it is to have only been discovered in 2003!    Here's an animation in gifv format...

Mike
Posted by Michael A. Phillips' Astro and related blog at 8:51 AM No comments: 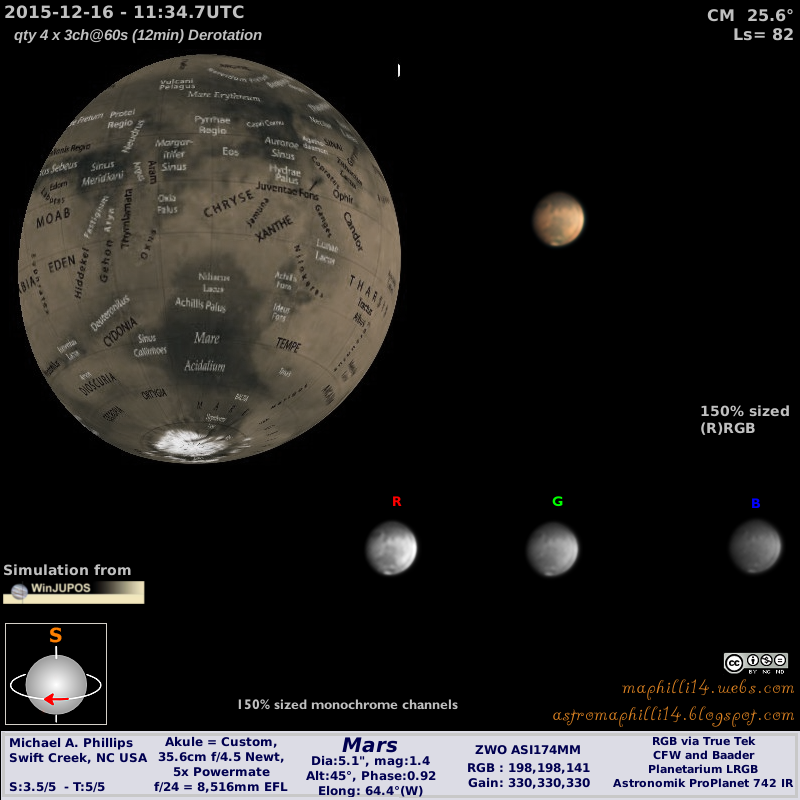 My novice eyes notice some interesting clouds on the morning limb around the areas of Tempe and Tharsis.  Just south of the North Polar Cap I spy some clouds over Mare Acidalium.  There also seems to be some interesting brightness around Cydonia.  Overall I was quite pleased with the way this image came out given it's very early and still quite low this apparition.
Posted by Michael A. Phillips' Astro and related blog at 10:44 AM No comments: 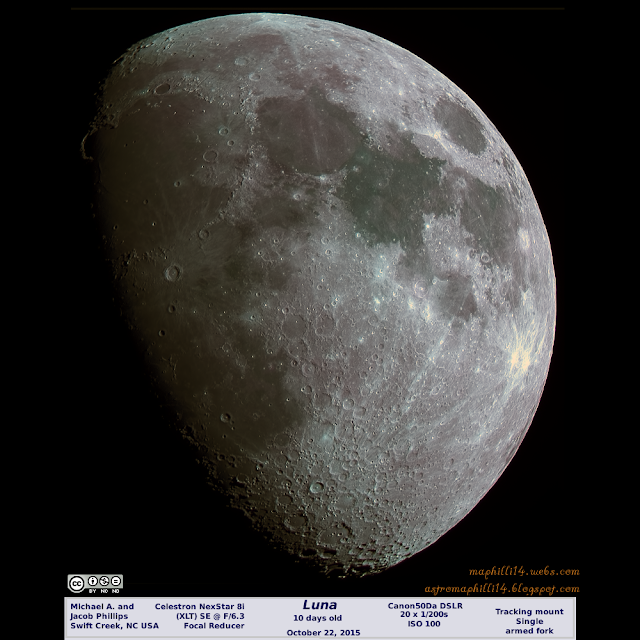 I took a series of 20 shots of the moon with my DSLR the other night.  Normally I choose the best 'one' and process it.  I have known for a long time that picking the top of the set, say X% and stacking them in Registax or AS2 would give much better results.  I've always struggled to do so.  I'm not sure if it's because I used the Canon raw (CR2) file format or because DSLR have massive resolution, but stacking has never worked well for me.  This time in particular I really struggled to get the photos to line up as I kept moving and recentering.  I took a cue from fellow CN'er zAmbonii (https://www.youtube.com/watch?v=-sTcrONM24w)  and added a few of my own twists.

Thanks and enjoy some new tricks!
Posted by Michael A. Phillips' Astro and related blog at 5:19 PM No comments:

Back in mid July of 2015 it was brought to the attention of several amateur astronomers like myself that there are bright spots on the cloud surface of Neptune.  A request was made by professionals to help observe these spots in red or narrowband IR.  I have had a string of poor weather and didn't have a chance until mid September.  On September 20th, I had some moderate conditions to try.  My method was to shoot wide field with the CCD as seen here.  I've superimposed an high-res RGB image on top to help identify Neptune.  The brightest and closest 'star' to Neptune is about the 7 o'clock position (lower left) and is actually the largest moon, Triton. 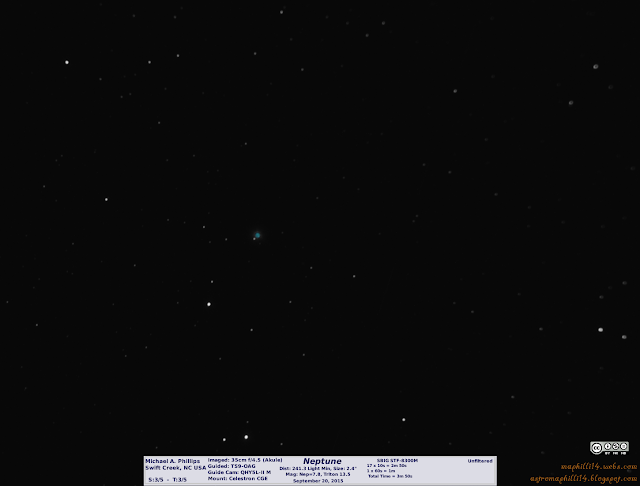 If you read the stats, Neptune was 241.3 light minutes away at the time of this photograph.  That's just over 4 light hours away.  For fun here's a size comparison via the wikipedia page.

At that distance Neptune is only 2.4 arc minutes in size and the top image that I took is fairly close to what you might see in a moderate telescope at medium magnification.

After some wide-field CCD shots, I put in my high-res planetary camera and took some LRGB as well as Infra-Red (742nm) shots.  Here's the aesthetically pleasing composite consisting of all 5 filters that also includes a Triton. 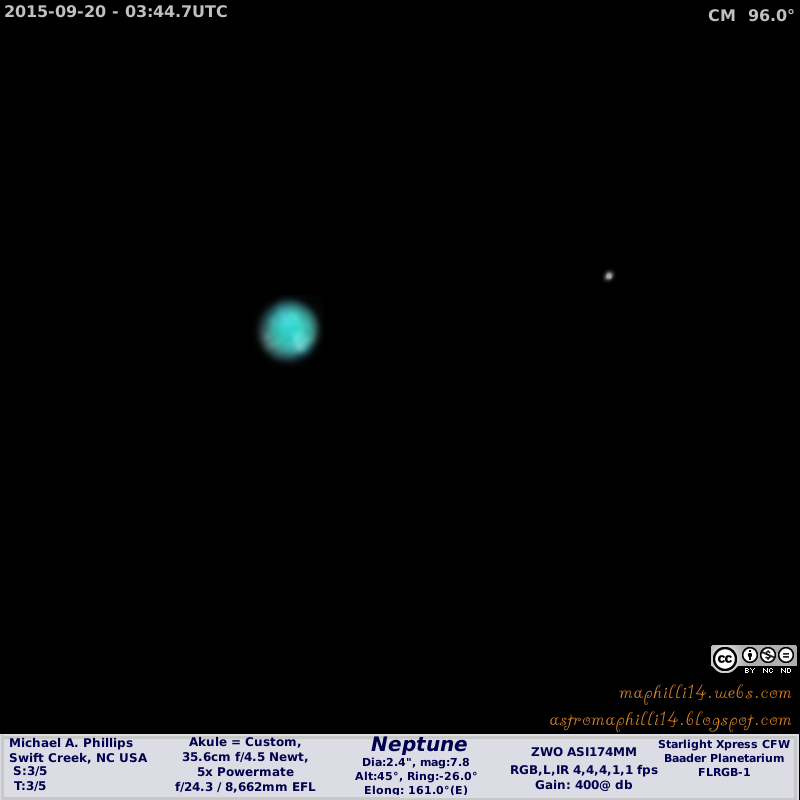 Finally for the detail oriented here's the full layout, including the sub channels used in derotation. 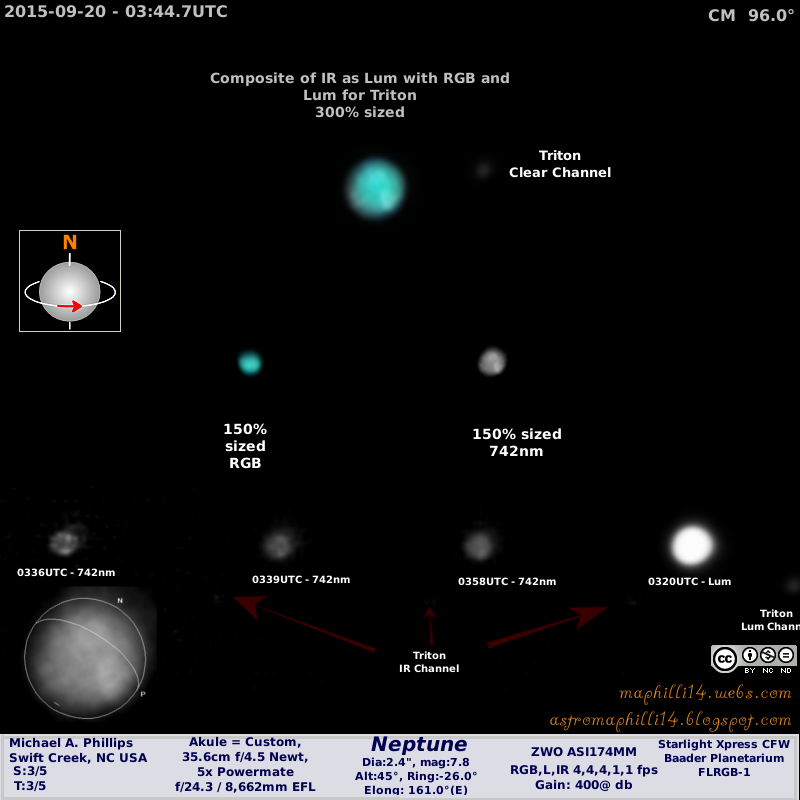 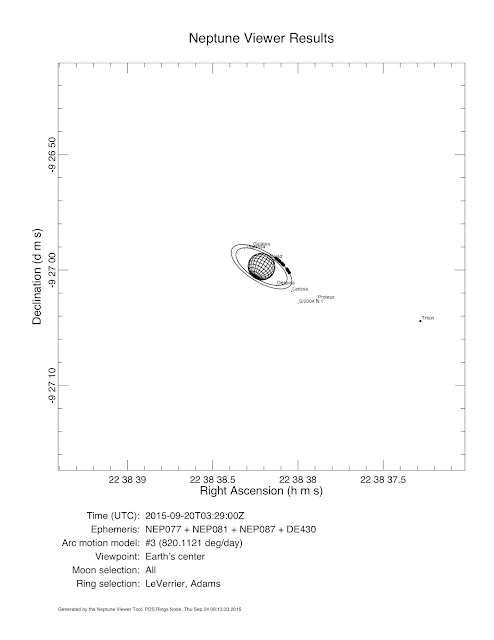 Thanks for reading and please do some well wishes for more clear skies for me, they've been far and few between.

If anyone is interested all source tiffs, sharpened files and WinJupos measurements are on my public Google Drive share located here  and contained in a 30+MB .zip file - > https://drive.google.com/file/d/0B9dWDZG-h1gvZ2tGdUNKTWQ1eE0/view?usp=sharing
Posted by Michael A. Phillips' Astro and related blog at 6:11 PM No comments:

A very **UNFAIR** comparison of CCD to DSLR!

This is a very **UNFAIR** comparison of CCD to DSLR!  It's unfair because of the following.

Also of note, the image scales are quite different and were somewhat difficult to line up.  I got 'close enough' and stopped getting precise alignment.  I don't think this a valid or fair comparison but a nice contrast to both style of cameras.

1) RGB via the DSLR only
2) Lum via the CCD and no filters at all
3) A standard LRGB combination of the filterless CCD as lum and the one-shot color as RGB.

Here's the DSLR ONLY 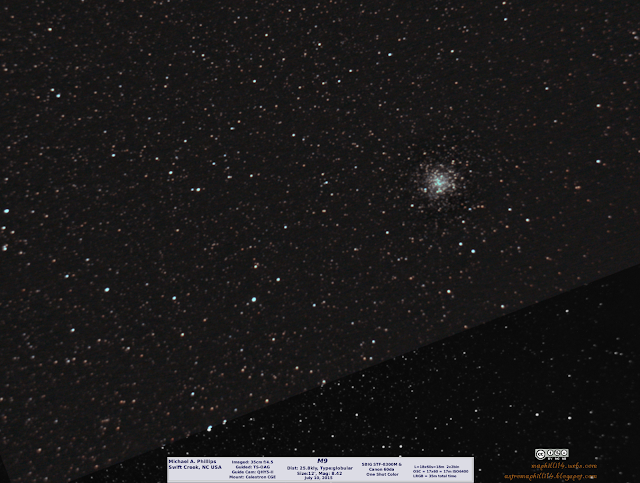 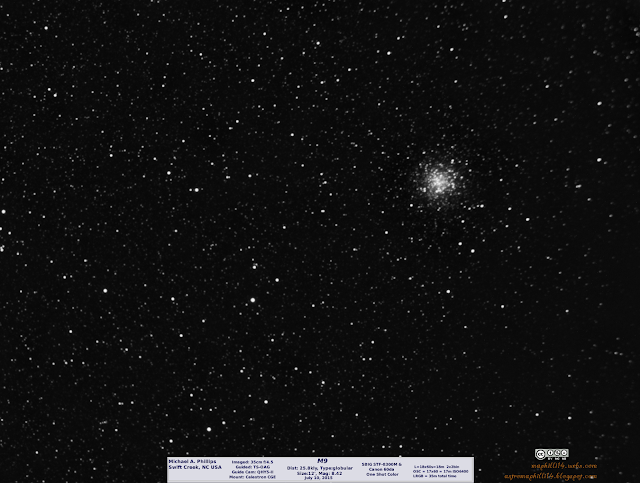 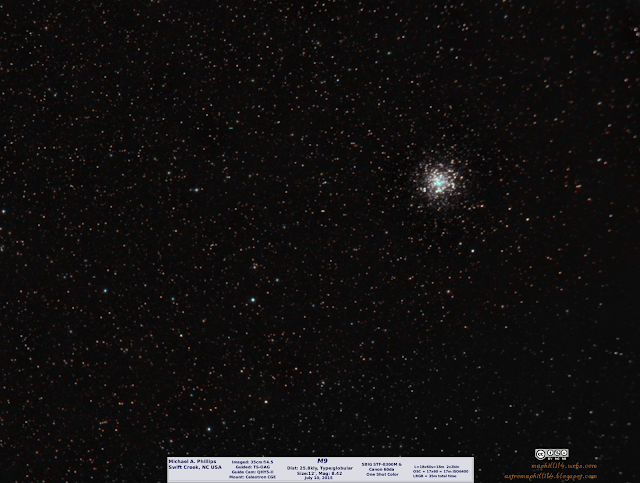 Perhaps it not even a comparison at all, but the lack of clear skies and poor planning had me running over the same objects within a week's span or so and having used different cameras got me hankering for a comparison even it wasn't like for like

Hope you enjoy and feel free to comment or critizice!!
Posted by Michael A. Phillips' Astro and related blog at 4:11 PM No comments:

Speaking of spring clouds and rain, here's 3 planets in one night to make up for it all!

Be sure to get to the bottom of this for something unique that I've never done before!

Weak spring astronomy weather, shoot three planets to make up for it.   YES!

I shot Venus, then Jupiter and finally Saturn.  I'll lead off with Jupiter since it's not as big as it used to be and well past peak.

Sporting a view of the little red spot, this is probably my last view for the year.  Although.... it's proximity to Venus might allow me a few more tries if the weather clears back up. 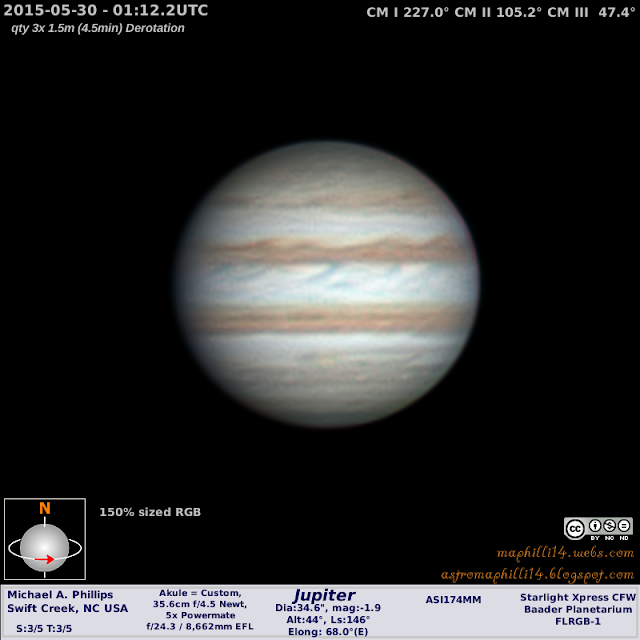 Next up is a pretty nice looking Saturn.  At a low altitude of 37° altitude, this will be hard to beat this year.  The rings have opened up to 24° since being edge on in 2009

The rest of 2015 is here - https://photos.google.com/u/0/album/AF1QipMDzUOnk6T0QJnWMeivPCpLE3TwLgN6oK7dqLed

You can view all years of my own photos of Saturn here - http://maphilli14.webs.com/saturn 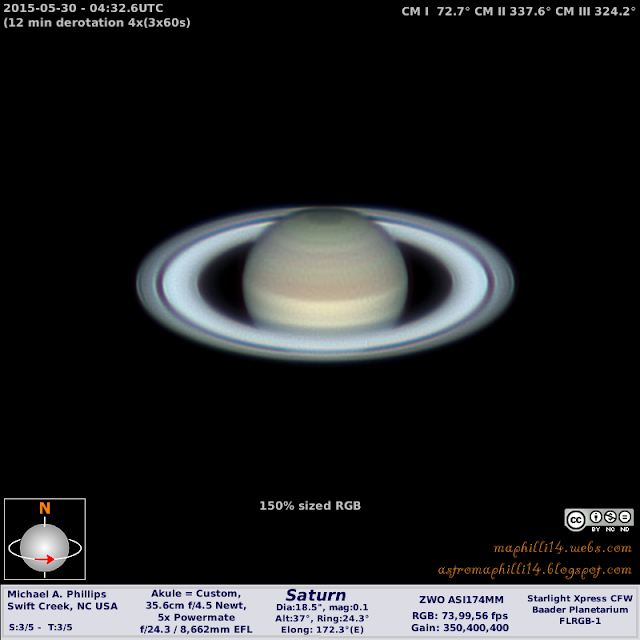 Finally and oddly the first photo of the night is Venus.  This image is in false color, comprised of Infra-red as Red, UltraViolet as Blue and Green is a 50%/50% blend of those two.  I used the UV as a lum al-la this technique (https://www.youtube.com/watch?v=oOeog89qnPY&feature=youtu.be)

Now to reward you for all your hard reading!  In the past I've shot Venus over a short time period but have not really gotten a chance to show the winds move the clouds.  Here's a short, two frame animation showing the cloud movement over just a few 10's of minutes.

Thanks and clear skies!

Posted by Michael A. Phillips' Astro and related blog at 6:52 PM No comments:

No, there's no part one per se.  Last January Kevin Quin, a very accomplished astrophotographer had some issues with his color filter wheel.  He lost one filter's worth of data from the whole night.  In is asking around it just so happened that I had my own images from the same date and time.  We're separated by about 235 miles straight line distance but had quite similarly good weather.  His quest to fill the gap in his own data was met with a warm welcome from me.  I always share my data and methods with all and in this instance he rescued his own data with a small help from my own.

Now onto part two: In some odd twist, I suffered a loss of the whole filter wheel itself and not just a malfunction.  I lost the ability to change filters quickly enough for me to shoot a color image.  I didn't think to ask anyone else for other shots of my own missing colors but did think the weather was good enough to shoot at least one color's worth.  Red is always my goto and usually has the best seeing.  I unscrewed the red from the wheel and put it into my imaging train.  It wasn't until many days later that I found Kevin was again out at the same date and time as me!  What luck, he was happy to share his stacks of Jupiter with me and I was able to make this color image.  Using a single stack of Kevin's blue data that he got from a 5min derotated .ser file, I combined with my own Red.  For green I used his blue and my red at a 50/50 blend.  This technique is often called RsGB or a synthesized green (http://www.astrosurf.com/cidadao/red_blue.htm) 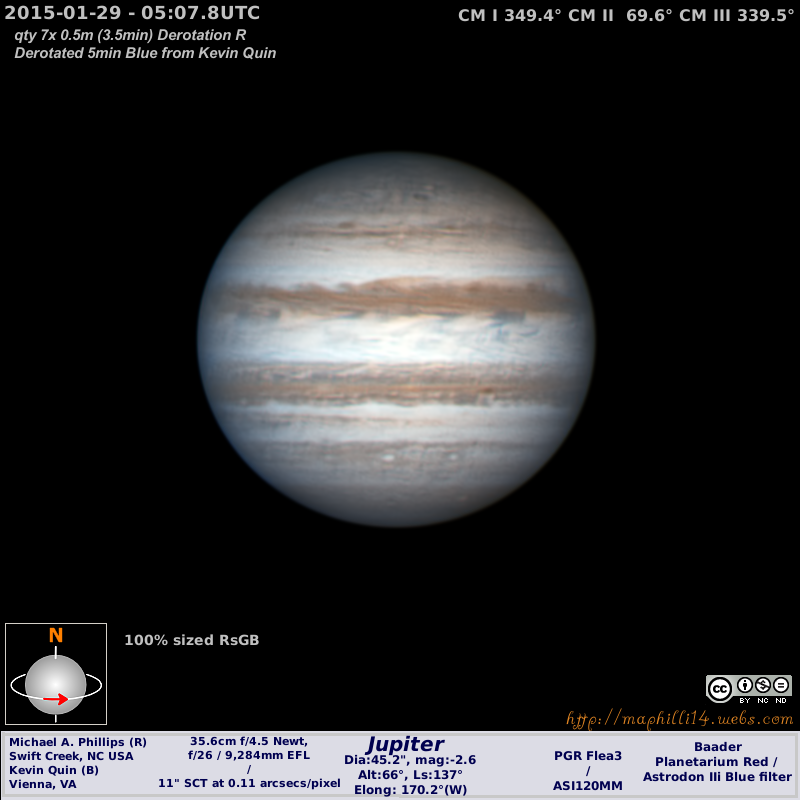 I found it amazing that despite our differences in locations, cameras, telescope types, styles and sizes we were able to bring out data together to make great images.

In discussing this type of coimaging work, we can't think of many folks who have done similar work.  Association of Lunar and Planetary Observers (ALPO), BritAstro, Planetary Virtual Observatory and Laboratory (PVOL) and Section Planets Italian Amateur Astronomers Union are all good candidates for such collaborative work.  All sites tend towards gathering images at separate dates and times and using them for study of changes over time or whole planet maps.

What Kevin and I are thinking would be a place to share raw or simple stacked images in an effort to learn and discover.  I'm curious to know what other's think about this.  If folks are interested we can setup a shared file repository and wiki to make it happen.

As a sample here is my raw red frame: 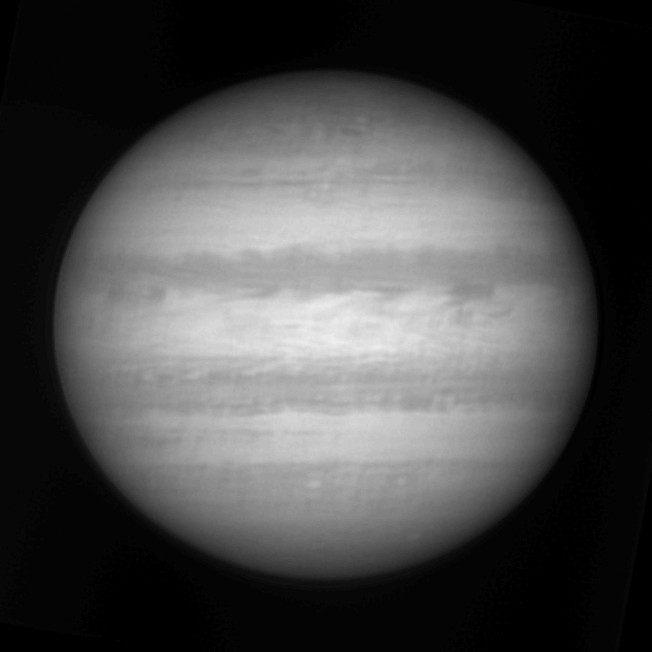 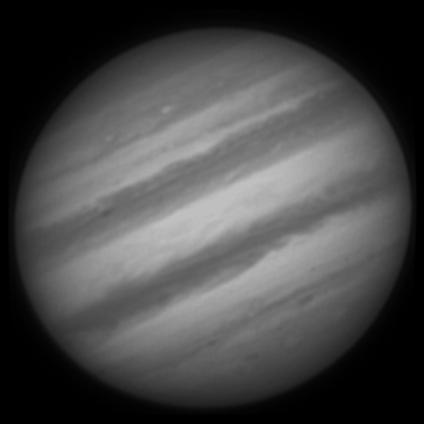 Special thanks to Kevin Quin for making my image really special!  Thanks Kevin!
Posted by Michael A. Phillips' Astro and related blog at 4:56 AM No comments: